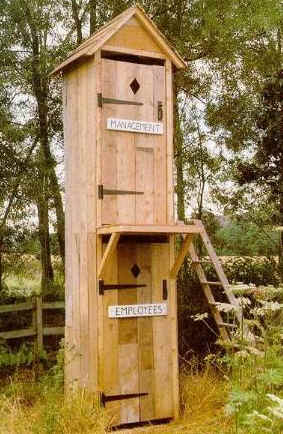 Proudly it stood, behind a long hedgerow, next to the gravel road in front of grandma’s house. It was a two-seater and as a child I thought it was grand. Flowers grew around the door and along the sides, as if to dress it up a little. My grandmother always grew the prettiest flowers, but for some strange reason, the flowers always grew tallest and prettiest around the door and sides.

I always looked forward to visiting my grandparents on special holidays. The drive, especially in the early summer evenings turned into night. We’d roll down our windows in the wagon. The sweet smell of new grass and pine needles would blow our hair, we’d sing to the top of our lungs on the old country roads and the fireflies seemed to light our way as my Dad drove the old station wagon toward his home place.

When we arrived at my grandparents, usually in the early morning hours, the house would already be full of cousins, aunts and uncles we hadn’t seen since the last get together. All of us younguns would pile into the living room, make our beds in the floor with old quilts my grandmother had made, or with sleeping bags we brought from home and we’d giggle until the grownups would shush us to sleep. Usually we were threatened with a belt before we’d hush up.

Invariably, we’d have to get up in the middle of the night to answer the call of nature. We couldn’t answer that call by ourselves... oh no! We’d have to wake our cousins to make the trek outside, down the steps, walk across the yard, around the long hedgerow and open the creaking door. We needed the extra courage I suppose.

Imagine four or five of us stepping lightly on our way out to that outhouse. There was no outside light. We imagined all kinds of things; lions and tigers and bears just waiting for us as we turned the corner of the hedgerow, or the outhouse would fly away with us inside just like the one in Chitty Chitty Bang Bang, and we’d end up in a foreign country when we exited. It didn’t matter exactly where, just somewhere exciting.

I was and still am deathly afraid of snakes, and I used to imagine when I sat down on that seat (with the great big blaring hole underneath, and a gentle breeze kind of stirring around down there), one would come up and bite me where the sun didn’t shine. Amazingly, no snake ever appeared . Thank goodness for that. One blood-curdling scream would have emerged from within that tin roofed little outhouse if I had even heard a hint of a rustle. It’s a wonder my brothers and cousins never thought of pulling that prank on me.

There was really no danger of an animal even being out there. We made enough noise to scare them away. It became especially adventuresome if the moon was behind the clouds, or if it was raining cats and dogs or if the blowing snow blinded us and took our breath away at Christmastime. No matter the weather, when the call of nature hit, out you had to go.

My grandparents didn’t have an indoor bathroom, you see, just the outhouse. But it was a fine outhouse. It had a tin roof, nice barn weathered boards, and had two seats, so if there was a line, most of the time you didn’t have to wait long. The wind whistled through the cracks in the boards, so one didn’t linger too long in the wintertime. In the summertime, things heated up real well under that tin roof, and flies were especially attracted to the outhouse. One didn’t linger long then either, if you wanted to take a deep breath.

There was even a hanger for a roll of store bought toilet paper, a luxury at best. I was told that a few years back, a Sears & Roebuck catalog was used for wiping paper. Dad even used to jokingly say that old corncobs were used, although I didn’t believe him for a minute. He also told me that he used to wake up with snow on top of his blanket because he slept in the attic and there were cracks in the boards. Imagine that!

That outhouse stood for a long time in my growing up years, even after my grandparents got an indoor bathroom. We used to use it in a pinch, especially when the whole gang was in for a reunion. One bathroom for 30 or so people just didn’t handle all the traffic.

My brother had his tooth knocked out after a school bus accident and he wore a partial plate with his front tooth attached. He came down with the flu one summer and ran to the outhouse to up-chuck. He up-chucked alright! He up-chucked his tooth along with everything else. He came crying into the house to tell us what had happened. My grandfather and Dad took an old coat hanger and a flashlight and went fishing in the hole for my brother’s tooth. They found it too. After a good bleaching, it was as good as new. He was a brave soul to put that tooth back into his mouth. The rest of us kids teased him unmercifully about it. You can imagine what we said.

I was a prissy little girl, and would sneak down to the outhouse, looking left and right down the road, making sure no cars were coming by to see me going in or coming out. Just the thought of people knowing that I was in the outhouse and what I had been doing, was an embarrassing thing, I thought. I remember starting Head Start one summer, and Mom got me up as usual and down to the outhouse I ran. This particular morning, I was having some trouble and took an extraordinarily long time to finish my business. I heard my Momma hollering that the bus was coming down the road and here I was still in my pajamas! I hid in there until the bus went by, too afraid of being caught in the outhouse. I guess you could say I played outhouse "hookey" that day!

Yep, that old outhouse, if it was still standing, would resound with the giggles of children, making an adventurous trip for a little business visit. Too bad the kids of today’s generation will never experience that little walk in the dark. Too bad they’ll never pile up in the living room floor with ten of their cousins and tell scary stories in the dark about that long walk out to the outhouse.